It’s not funny – my Nespresso machine has been on strike for a couple of weeks now. The darkest time of the year! Thanks, dude!

One of my toddlers wakes up every 20 minutes each night (while the other one sleeps dreamily, cuddling his blanket)… so believe me, I really could use some coffee.

Tomorrow it’s Monday again and with my 8 euro a day coffee expenses on work days (that’s two lattes, Helsinki-priced) I’ll soon have a great excuse to buy a new coffeemaker since the expenses will quickly add up. Always think positive! 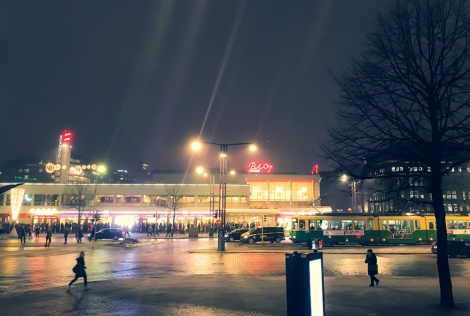 I snapped this photo about a week ago while exiting a building. As usual, I didn’t frame or anything, just saw something I liked and within 2 seconds of that I had dug out my iPhone and taken a snap. Why? I have no idea. I’m not even on social media. It was just for myself, and maybe for this blog. All of you proper photographers out there will be doing a facepalm right now: yes, I know I should at least stop walking while taking a picture! Sorry.

Anyway, the building in this photo is my favorite building in Helsinki, architecturally. I’ve mentioned it before. It’s 1930’s functionalism and what I love the most is the design of the neon signs, lights and other details that match the era. I also find the curvy edges and stripped minimalism of the building quite appealing. The movie theater it used to house was beautiful on the inside with round hanging lamps, dark red walls and a very large clock on the wall.

I tried to look up the building for some history but didn’t find much. Reading this short description, however, brought back some unexpected memories for me! I had a sudden flashback of buying candy as a kid at the Varuboden store that doesn’t exist anymore. I would stop there on the way home from school with a friend – we would usually also stop at the Body Shop nearby. In the early 90’s, Body Shop was all the hype amongst us 12-year-old girls over here. (I still love their mango body butter!)

I also had another flashback: I was lining up to see Silence Of the Lambs with my mother but I was underage and they didn’t let us in (too scary!)

A third unexpected memory came at the mention of a TV studio. I had completely forgotten they used to do broadcasts from there! I even went on a dance show once, believe it or not! I had been taking all sorts of dance classes for years and all the other kids from dance class were going to dance live on a TV show, kind of like MTV Grind but a completely innocent teen version of it.

My friend dragged me there with her and did my hair and make-up, she even dressed me in her clothes though she was much shorter than me! (That’s what teen girls used to do, and probably still do: each other’s make-up with such a loving touch. Now if someone tried that today I’d tell them to go away! You eventually get stuck in your routines.) The music playing was Tupac and Return Of the Mac. The presenter was the guy who later on had the hit Freestyler (Bombfunk MC’s) – I loved that song.

I’m not sure why I’m sharing all of this. I played around with my new Adobe Creative Cloud tools to enhance the photo I took, but the quality of the original was too poor. I could start again but I’m too tired. You live, you learn. Next time, I’ll concentrate on getting it right already when I take the photo.

If you look closely, you might see a crowd in front of the building. It’s a 3 hour line to enter a new museum that was recently opened where the movie theater used to exist. Why are they lining up for 3 hours, you might ask? Is it a monthly free-admission day or some special event? Nope. People are lining up to see an exhibition that just ended today.

These lines were present every day for over a week! Never mind the cold slushy stuff falling from the sky and splashing onto your face and into your shoes. Never mind the fact that the entrance fee is 18 euros. They all wanted to see it, starved for entertainment.

I’ll catch the next one. Queueing in winter weather isn’t my idea of fun. But I’m happy the building has finally received the attention it deserves! Now everyone wants to go there.

66 responses to “Lights In the Darkness”

Home Is Where Our Stories Are Welcomed To Begin.