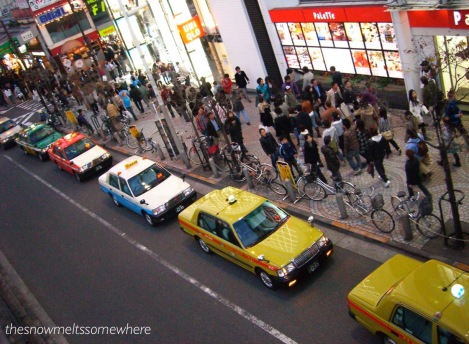 The JR Yamanote line was our saviour. The circular train line was easy enough to understand and we were able to tour the different neightborhoods conveniently.

We rode the JR line everywhere. It took us to Harajuku to spot some street fashion. Actually, Harajuku surprised me with what must’ve been the world’s longest line to H&M. Young Japanese women were queueing outside and there was a doorman letting people enter in carefully calculated portions. There was a seperate, designated queueing area on the street outside the store, leading me to the conclusion that this probably wasn’t a one-time phenomenon.

JR led us to Shinjuku, where we fulfilled our tourist duties and did the compulsory pilgrimage to the famous crossroads featured on every Tokyo guidebook’s cover. It was raining and everyone had umbrellas with the craziest decorations. The more discreet ones were see-through plastic umbrellas like the ones I had as a child in the 1980’s. I suddenly wanted to buy umbrellas and walk around with them, and not just because of the rain.

By venturing a transfer onto another line (leaving the familiarity of JR!), without the stops written in the Western alphabet, we made it to Roppongi to snap some well-timed sunset photos from Mori Tower. 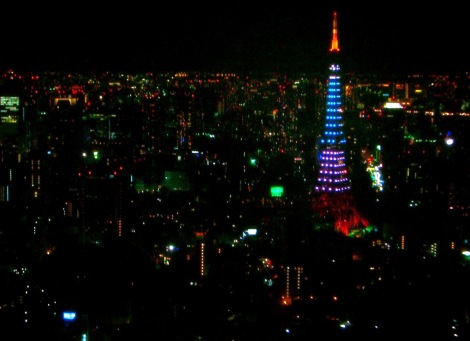 For such a huge city, Tokyo had a surprising amount of green to compensate with, zenful parks with peace and quiet on offer. We watched koi fish swim around, encountered some huge spiders in the bushes and wondered at a Zeppelin silently sliding past us in the sky.

In the parks, we strolled among the locals, one of whom had a pet dog that ran around in circles around me until it became dizzy. My legs were by then already tangled in its leash and the owner laughed as hubby took photos. Many locals were practicing their music outdoors after work.

One day we got lost in a residential area looking for a sword museum. An old couple who were tending to their garden tried to point us in the right direction. It might’ve been routine for them.

Despite occasionally getting lost, we always found our way back. It was the everyday things that were hard to navigate. Like recognising food! Is it savoury or sweet? How do you eat it? Will I make a fool of myself if I order this like that? How do I open the toilet door from the inside when there are no handles and all the buttons have text in Japanese? Why are there vending machines on every street corner but I never see anyone using them?

Places like Tokyo make you want to go back and explore more. To get answers to all your questions and to learn to navigate.

Copyright: All images and content © 2015 – 2021 The Snow Melts Somewhere. All rights reserved.

A place for me to write down what I'm thinking and share with the world.

For nature photo lovers. Watch and get inspired!:)

Stories from a Canadian girl who can't stay in one place