I’m posting two photos from the opposite ends of the world since my mind seems to be wandering between them.

I took the first of these two photos in Finnish Lapland last year. It is of an atmospheric phenomenon which, according to Wikipedia, is commonly referred to as sun dogs, phantom suns or parhelia – it’s created by light interacting with ice crystals in the atmosphere. It basically looks like three suns and had me blinking a few times before taking this picture. 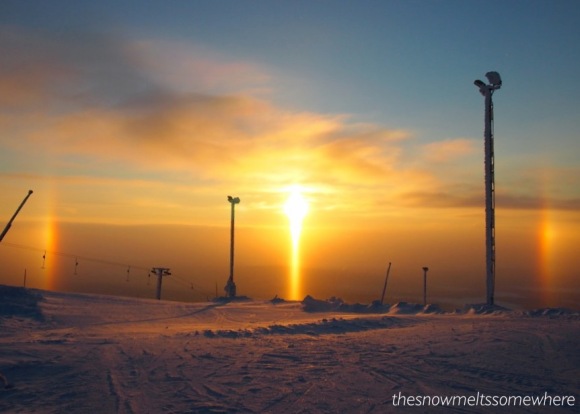 The second picture in my ephemeral “dogs and cats” theme is of a fleeting reflection in a garden one spring day in Buenos Aires, Argentina…

A cat cautiously examining its reflection. Mirror, mirror on the wall, who’s the fairest of them all?

Both pictures do a fine job of speaking towards the prompt. https://grieflessons.wordpress.com/2015/03/27/weekly-photo-challenge-ephemeral/

Your photo from Lapland is really impressive!

The 3 sun phenomenon is quite impressive! 🙂

Stunning Beauty with the sun reflecting in both snow & sky ❤ .. & cute kitty … did he catch a golden fish by chance ? … I ask cause I used to have very fluffy pure white furry little friend .. who would fish them out of the neighbours pond and bring them in totally unharmed .. unlike me while trying to put them back unseen 🙂

I think this cat was looking for insects… 😮

I’ve heard of sundogs but never seen one. Great photo and loved the cat too.

Love the pairing of these two images. Fine work!

I love the reflection in the water.

Join 6,000 other followers
Follow The Snow Melts Somewhere on WordPress.com

Privacy and Cookies: This site uses cookies from WordPress.com and selected partners. To find out more, as well as how to remove or block these, please see here: Cookie Policy. This is a non-commercial, recreational blog and the ads belong to WordPress.

How I Accidentally Grew a Jungle (In My Living Room)

Like most things, it started from the smallest seed. When we got it, it was like a tiny puppy of a plant: young and fresh. […]

Let’s be pirate elves! Aye aye, rrrrh! Two pirate elves – the coolest kind of elves, if you ask me – climb the blue volcanic […]

Reflections on the river

Mind is like a flowing river and the reflections on it keep changing. Taking snapshots of some reflections to share with you...

brought to you by the letter Z, Tuesday afternoons, and chocolate chip cookies

See the Extraordinary in the Ordinary